FTC Disclosure - If you make a purchase by clicking a link on this page, we receive a small commission. There is no cost to you, and this does not influence our content.

A training bra and preteen bras are also known as first bras or bralettes. They were first developed in the 1950s.

These types of bras are designed for girls who have just begun to enter puberty and develop breasts. These girls do not yet have fully developed breasts that are large enough for a standard womens bra.

Before the advent of the the first bra girls with developing breasts that did not yet require a brassiere typically wore camisoles and cami sets beneath their clothing.

The majority of training bras are generally soft cup bras and do not have underwire support because it is not necessary.

The primary purpose of a training bra is to accustom the wearer to the idea and feel of wearing a bra; most girls who wear these first bras are between nine and thirteen. 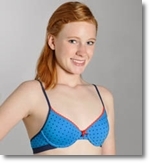 Most training bras and preteen bras are unlined, and may more closely resemble a sort of tank top camisole than a bra, although some training bra styles do have bra cups that may even have some padding to help a girl’s breasts appear more developed than they actually are.

The development of the training bra and the first bra styles of the 1950s was spurred by increased media emphasis on large-breasted celebrities such as Jane Russell, Lana Turner, and Marilyn Monroe.

In many social circles, a girl’s breast size and ability to wear a brassiere and preteen lingerie became central factors in her self-esteem, as well as the respect accorded of her peers.

This is really when the popularity of the teen lingerie for young girls started to take root and over the years has blossomed into a large part of the lingerie and intimate apparel industry that we see today.

The training bra and teen lingerie has always had fierce opponents in certain areas of the country and all over the world.

Some people feel that training bras sexualize girls prematurely, serve no functional purpose, and exploit girls’ fears about their bodies.

Opponents of preteen and teen bras see lingerie and intimate apparel undergarments primarily as a profitable business venture that capitalizes upon the sexualization of young children.

And, on the opposite side of the coin, advocates of the training bra or teenage bra contend that these brassieres create comfort for the developing female body, even if that comfort is at times simply psychological. 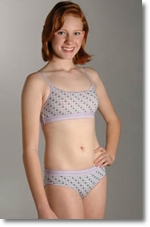 Today, preteen bras are quite popular in most Western countries, where they may be worn by girls as young as the second grade.

Taller, heavier girls are the most likely to begin wearing these first bras early, as these individuals normally exhibit the beginnings of breast development before their shorter, thinner counterparts.

They are not ubiquitous undergarments in the East, or in African or Middle Eastern countries, where lingerie and intimate appare fashions and standards of dress from children and adolescents are often wildly different from Western norms.

Children and “tweens” should never be forced into wearing a training bra or any kind of lingerie or intimate apparel.

Most girls will jump at the chance to purchase some training bras as soon as their breast buds begin to develop.

However, others experience feelings of embarrassment or shame at this stage.

Parents should strive to help children accept their bodies as they are, and not force the child into wearing a lingerie undergarment that causes them excessive distress.

Leave training bra and return to the teen lingerie

FTC Disclosure - If you make a purchase via a link on this page, we may receive a small commission. There is no cost to you and this does not influence our content.

Copyright 2007-2018  Love-of-Lingerie.com.  All Rights Reserved.
No Reproduction Permitted Without Permission

Affiliate Disclosure – Love-of-Lingerie participates in affiliate advertising that is compensation based, including Amazon (amazon.com). The compensation earned does not influence the information on this site, and Love-of-Lingerie does not accept merchandise or payment from manufacturers in exchange for writing reviews. We only recommend products that we believe are worthy of endorsement based on our experience. You should always exercise due diligence before purchasing goods or services online. If, you have any questions regarding this policy please Contact Us.